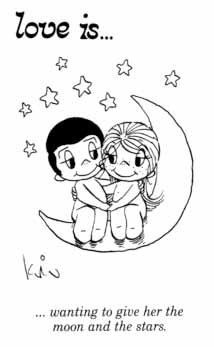 The author of the famous images on chocks is New Zealander Kim Grove Casali, first invented comics in 1970. It was the year of the film “Love Story” premiere, whose slogan was “Love means never having to say you’re sorry”. At first black and white comics has appeared on the editorial page of the Los Angeles Times and won the first popularity, been weekly publishing in the latest issue of the newspaper.

New Zealander Kim Casali, nee Kim Grove, began drawing on napkins sketches with paunchy girl with little sexual characteristics and exactly the same boy. These wipes she underlay to her future husband, Roberto Casali a handsome Italian man. Her courtship with “Love is…” style was rather effective and they have married. 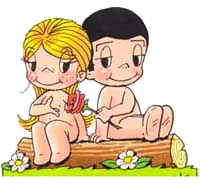 In 1975, Kim has met with a British designer, Bill Asprey, whom she then, in 1978, asked to create a special, color version of the comics for British newspaper “Mail on Sunday”. Bill agreed, and after a while these pictures have been picked up by Turkish manufacturer of Intergum.

Love is … gum – Turkish chewing gum with liners about love. Was popular in Russia and Ukraine in 1990, and is still been producing in Turkey. Chewing gum is wrapped in two colors and contains two tastes, symbolizing “the love of two fruits”.

This is how I’ve gotten these lovely pictures about love. Kim Casali has died in 1997, and Bill Asprey continues (for 34 years!) to draw all the new stories about girl with a boy. According to rumors, only recently he has gotten know that in his images are wrapped chewing gums. The never-ending story you can read at the site Gocomics, new series appear every day there. 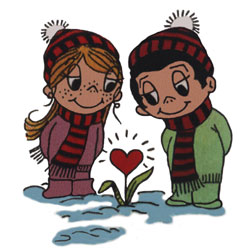